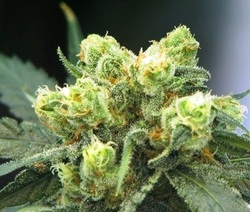 What are Autoflowering Marijuana Seeds?

How are they made?

Autoflowering seeds are created by crossbreeding Indica or Sativa strains with Ruderalis which flowers in a very short period of time.  Ruderalis is a subspecies of cannabis sativa that has adapted to the typical condition of the summer season in the northern part of the world and has an ability to flower in little time.

If you are new in growing marijuana seeds or you have a very limited space in your home, autoflowering marijuana seeds are perfect for you.  For people who do not know how to grow weed for medical purposes or for recreation, planting an autoflowering seed is the easiest way to achieve good harvest especially for the sea of green and continuous setups.

Growing marijuana by means of autoflowering seeds takes only about 9-11 weeks.  Male flowers are visible within the two week period while the female flower takes a week longer to show up.  On the fourth and fifth week, the female flower has a quick flowering stage.

Growing marijuana also requires a person to know how to grow weed in order to have a quick and rewarding harvest.  When this type of marijuana seed is grown outdoors, it can produce more than one harvest in a normal summertime.  The person who does not know how to grow weed will miss this great opportunity as autoflowering seed can also grow within ten weeks from seedling to maturity if it is exposed to light.

Autoflowering seeds do not need to have separate grow rooms but the pot size and nutrients are very important in growing cannabis seeds in order to get the desired yield.  With the continuous light cycle, the grower will be able to keep the autoflowering plant more productive. It is also a great trick to plan for a staggered planting.  This is done by planting new seeds every time the grower harvest the buds or remove the male flowers.

Most autoflowering strains can grow well in soil or in a hydro system depending on the grower’s preference.  It is also advisable to plant the germinated weeds into the final pot and under an 18 hour light cycle.  Keep in mind that when autoflowering seeds are planted in a smaller pot, it will also have smaller yields.  Learning the nutrient regime for the vegetative and the flowering stage also allows you to better yields.  Although most autoflowering marijuana seeds do not need many nutrients for vegetative stage, it will not hurt a bit if it will continuously receive nutrients at this stage.

On the other hand, if autoflowering seeds are grown outdoors, it can have the optimum growth between May to August.  Good yields will be achieved when harvested in November.  Autoflowering marijuana strains normally grow about 50 cms tall.